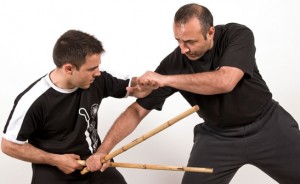 An introduction to Eskrima

The martial traditions of other cultures often teach unarmed skills first, and then teach the students to regard a weapon as an extension of the empty hand. In FMA (Filipino Martial Arts), weapons are used from the earliest stages. This has the following advantages: